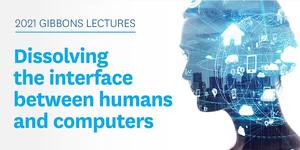 2021 Gibbons Lecture Series:
Dissolving the interface between humans and computers

For many people, it's become impossible to imagine life without a smartphone. We're so used to keeping them close and checking them constantly without thinking. They could be seen as permanent attachments to our bodies, or permanently attached burdens.

Technologies beyond the smartphone that blur the boundaries between the human body and computers are becoming more commonplace, and are merging our work, social, personal and cultural identities. Immersive virtual reality is widespread, and seamless augmented reality seems imminent. There are also signs that full brain-computer interfaces are making their way from science fiction into reality.

Have we reached the pinnacle of these human-computer technologies? Is there more functionality or benefit we can gain? And how will they impact our wellbeing and community cohesion?

Our 2021 Gibbons Lecture Series will examine the latest technologies connecting humans and computers; the ways they are developed, the new innovations on the horizon, and how they could be used to connect ourselves to wellbeing, diversity and culture.

The 2021 Gibbons Memorial Lecture series will be held in person and also streamed live via the university website.

There are four lectures in the series on 6, 13, 20 and 27 May - lectures commence at 6:00pm.
There will be some refreshments after each lecture at 7pm in the Basement Foyer of the Library Building (109-B00C1).
PLEASE NOTE: We will take necessary precautions to ensure we comply with the alert level restrictions

It was in the times of mainframe computing when researchers first explored Augmented Reality (AR) as an interface concept. Since then much time was spent on the fundamental issues faced when implementing AR interfaces such as display technologies and tracking the user in space. Many of these issues are now solved and we are increasingly transitioning into the commercialisation of Augmented Reality technology. At the same time research moves beyond traditional AR use-cases and explores how we can alter our perception with techniques from AR.

Tobias Langlotz is an Associate Professor at the University of Otago. Before coming to New Zealand, Tobias studied at the Bauhaus University in Weimar (Germany) and Graz University of Technology (Austria). At the University of Otago he is co-directing the Human-Computer Interaction Lab where he is following his research interests at the intersection of Human-Computer Interaction, Ubiquitous Computing, and Computer Graphics. His current projects not only explore computational glasses to enhance human perception but also include nomadic telepresence solutions. His work has been highlighted at ACM CHI, ACM Siggraph, and IEEE Virtual Reality. Tobias' work is supported by research grants from the Royal Society of NZ, National Science Challenge and MBIE, as well as industry such as Qualcomm.

Please note that this session may be video or audio recorded for viewing by other members at a later date. As it is possible that audience members may be incidentally recorded, please let us know if you specifically want to be excluded and we will ensure you are not shown.